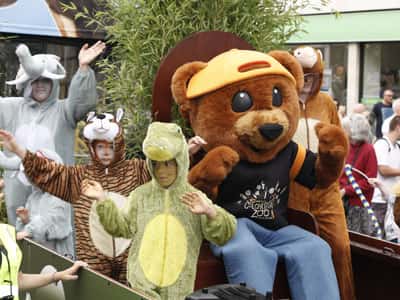 The carnival procession was made up of over 50 floats, vehicles and foot entries with around 1,200 people taking part.  Many of the entries embraced the 'Animals on Parade' theme, which was chosen to celebrate the 50th birthday of Colchester Zoo.  The crowds watched various costumes such as lions, elephants and bears mixed in amongst samba dancers,  belly dancers,  majorettes and other local performers.

Meanwhile the party continued in Castle Park where festivities started at 11am and continued until 8pm. In lower park the stage and arena featured performances from local dance groups, choirs and bands.  In the upper park a number of performances took place on the bandstand and a dedicated area featuring activities for younger children could be found on the Meadow including a bug zoo,  story telling and karting.  Those in the park in the morning were also treated to a siren wailing fly past by the local National Police Air Service helicopter.

Profits from the day will be awarded to local good causes in the form of grants.

An estimated 12,000 people watched the procession and 5,000-7,000 attended the family day in Castle Park.  It was a great success and we had a great time working side-by-side with Colchester Round Table for another year.