Dereham: Fun and Laughter with the Red Card Comedy Club 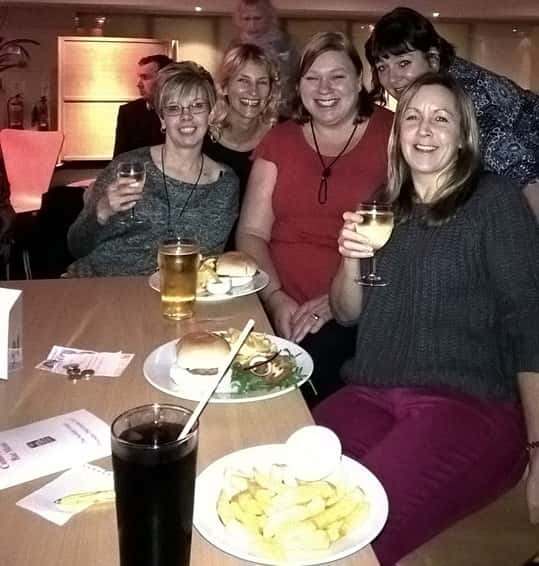 Dereham Ladies Circle whizzed off to the Red Card Comedy Club in Norwich on 29 October for a night of rib-tickling laughter!!

The Comedy Club were celebrating their 14th birthday so the planned acts were looking extra special (see below).

We bagged our seats, set up the drinks kitty and made our selections from the “oh not so healthy but just what we need” menu and laughed our socks off!!

THE RAYMONDS AND TIMPKINS REVUE
Self style "specialist purveyors of sandal based choreography solutions",  this is one of maddest, most fabulous comedy cabaret acts you are ever likely to come across. Lightning fast choreography meets uber swift editing in a fantasmagorical collision of quality entertainment.
“A mad, anarchic triumph of stupidity over style. Not to be missed”(The Guardian)
www.raymondandmrtimpkins.co.uk

IAN MOORE
A regular on BBC 5Live’s Fighting Talk and BT Sport’s popular ‘The Football’s On…’, Ian is a natty dressing mod who lives in France and makes chutney as well as writing books and constantly travelling around the globe performing. A top class cultured comic with a keen observational style, Ian has headlined at London’s famous Comedy Store as well as Reading and Leeds Music Festivals (but he is too well dressed for Glastonbury).
"One of the countrys top comedians" (The Guardian)

ASH FRITH
Essex lad Ash started gigging in 2011 and has enjoyed a rapid rise through the comedy ranks, performing with some of the best acts on the UK comedy circuit including Russell Kane, Terry Alderton and The Boy With Tape on His Face.  His down-to-earth observations are very very funny and his fresh style has won him a lot of compliments.

JOHN MANN (mc)
Red Card stalwart and a favourite on the UK circuit, John Mann's wry gags and silly jokes are guaranteed to keep the laughs coming all night.

Are you interested joining us? Would you like to find out more? For further information about Dereham and District Ladies Circle, please contact Angela at ladiescircle58@gmail.com